On this day (10th January) in 49 BC, Julius Caesar and his troops famously crossed the Rubicon, the river marking the boundary between the province of Cisalpine Gaul and Italy. Taking the 13th Legion over this forbidden frontier constituted an act of treason and triggered civil war in Rome. According to the historian Suetonius, Caesar uttered the famous phrase ālea iacta est (“the die is cast”).

Last June, I travelled along the Via Aemilia in the footsteps of Julius Caesar, crossing the river and following the soon to be dictator’s path towards Rome.

The Rubicon has been one of the world’s most famous rivers ever since Julius Caesar crossed it. Three rivers in north-east Italy were successively thought to be the historical Rubicon; the Pisciatello, Fiumicino and Uso rivers. It was not until 1933 that the Fiumicino, which crossed the town of Savignano di Romagna (renamed Rubicone by Mussolini), was identified as the former Rubicon. This theory was not proven until some 58 years later in 1991 when three Italian scholars, using the Tabula Peutingeriana – a medieval copy of a Roman road map – and various ancient sources, were able to prove the location of the original Rubicon. The distance given in the Tabula of 12 miles from Ariminum (modern-day Rimini), coincides exactly with the distance of the Fiumicino from that city. However the location is still contested.

Today, if you want to cross the Rubicon, you need to go to Italy in the Region of Emilia-Romagna, in Savignano sul Rubicone which is located halfway between Cesena and Rimini, along the Via Emilia and the Bologna-Rimini railway. The most famous monument of the city is of course the three-arched Roman bridge (26 m long and 6 m wide) which recalls this historical event.

However the bridge does not date to Caesar’s time. In his De Vita Caesarum (1.31.6), Suetonius, who served briefly as secretary to Hadrian, reports the following Julius Caesar’s words: “Even yet we may draw back; but once cross yon little bridge, and the whole issue is with the sword.” The small bridge (ponticulum) of Caesar was most likely made of wood. The exact date of construction of the current bridge is unknown but probably dates from the era of Augustus or Tiberius.

Over the past centuries the old bridge underwent various modifications and alterations but the worst damages were made by the German army in 1944, when they mined the pillars of the bridge. The reconstruction of the bridged started in the 1960s and was completed in 2005.

A modern statue of Caesar stands next to the bridge. It is a copy of the statue placed by Benito Mussolini on the Via dei Fori Imperiali in Rome. 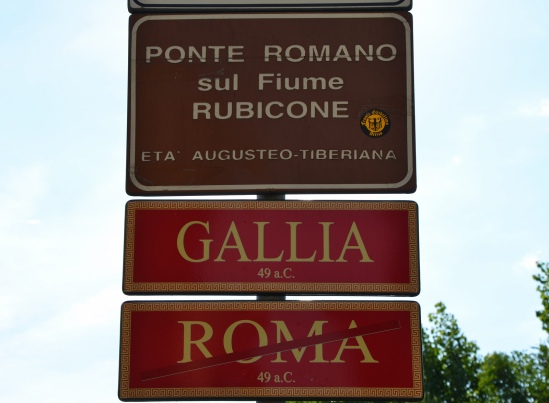 After crossing the Rubicon, Caesar advanced to Ariminum (modern-day Rimini), the first city outside his province. Tradition dictates that Ariminum’s forum was the scene for Julius Caesar’s famous speech to his soldiers when he uttered the words “alea jacta est”. In Rimini, a monument in Piazza Tre Martiri marks the place where Caesar allegedly harangued his troops.

The inscription reads: Gaius Caesar, dictator, after crossing the Rubicon during the civil war, addressed his fellow soldiers here in the forum of Ariminum.

The square, once named Piazza Giulio Cesare in Caeasar’s honour, also has a bronze statue. Mussolini donated a statue of Caesar to the town of Rimini in 1933 (not the one which currently stands), similar to that shown in Rome along the Fori Imperiali. The statue was placed at the foot of Rimini’s tower clock and each year on the Ides of March local fascist organisations would parade.

At some stage before the liberation of Rimini, the local authorities took the statue away and buried it in a ditch on the Northern outskirts of the town. The original statue was re-discovered from its hiding place in the 1950s but was immediately taken into the custody of the military authorities who placed it in the Giulio Cesare barracks, where it still remains. Finally a copy of the statue was made and placed in the corner of the square.

The name of the Piazza was changed from Piazza Giulio Cesare to its current name Piazza Tre Martiri, in honour of the three young partisans who were hanged publicly in the square on August 16 1944 (Luigi Nicolò, Adelio Pagliarani, and Mario Capelli).

The current Piazza partly follows the plan of the forum of Ariminum, the Roman colony founded in 268 BC. Situated at the intersection of the city’s two main streets, the cardo maximus and decumanus maximus, the original square was paved with large stone slabs, as seen in the section now exposed.

Today Piazza Tre Martiri remains at the heart of Rimini’s commercial and cultural life. It is the perfect starting point for touring the city’s magnificent ancient ruins: the Bridge of Tiberius, the Arch of Augustus, the Hadrianic amphitheatre and the Surgeon’s Domus. 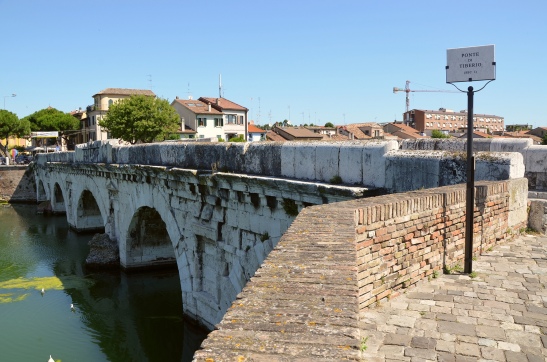 Tiberius Bridge (Ponte di Tiberio) over the Ariminus river in Ariminum on the Via Aemilia, constructed under Augustus and completed by Tiberius in 20 AD as the inscription sculpted on the inner part of the two parapets states, Rimini

Arch of Augustus at Ariminum, dedicated to the Emperor Augustus by the Roman Senate in 27 BC, the oldest Roman arch which survives, Rimini, Italy 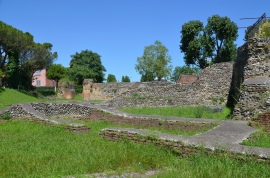 6 thoughts on “Crossing the Rubicon”