In the context of “The Unseen Museum” rotating-object programme and the temporary exhibition “Hadrian and Athens Conversing with an Ideal World”, currently taking place in the Gallery 31a of the Sculpture Collection, the Archaeological Museum of Athens brought to light two unique artefacts from their storerooms. Fifteen selected antiquities had already been displayed, and this time the Unseen Museum welcomed Hadrian and Antinous to a meeting, 19 centuries after the Emperor’s visit to Athens.

The visitors had the chance to see for the first time a colossal bust of Antinous from Patras and an inscription dedicated to Hadrian from Athens. These were presented in the “Hall of the Altar” of the museum from November 2017 to March 2018.

The nude portrait bust of Antinous was found in 1856 during building works in Patras in the northern Peloponnese, along with a second identical bust of Antinous of similar dimensions and type which is displayed in room 31a of the museum and currently on show in the temporary exhibition (inv. no. 417).

Both portraits share the same idealised features and stylistic characteristics which are typical of many images of Antinous; the broad chest, luscious curls, full lips, straight nose and thick eyebrows, and a melancholic expression with the twist of the head downwards and to the left. However, the bust from the storage-room looks more youthful than its counterpart and shows damages to its nose, cheek and chin. The technical characteristics of both sculptures suggest that they were produced in the same workshop, in all probability, an Attic one. However, the exact circumstances of their discovery are not precisely recorded. 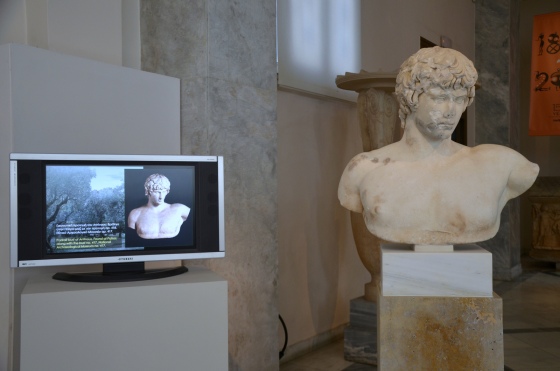 In antiquity, the city of Patras was known as Patrae (or Patrai), and like its modern successor was the chief city of the north-west Peloponnese. At the time of Hadrian’s reign, Patrae had been a Roman colony for more than a hundred years (founded by Augustus in 16-15 BC under the name Colonia Augusta Achaia Patrensis). Pausanias (7.18-22), the Greek traveller and geographer of the 2nd century AD, is the chief chronicler of the remains of Roman Patras. He mentions a sanctuary of Artemis Laphria on the Acropolis, a sanctuary of Mother Dindymene, a temple of Olympian Zeus in the marketplace, other sanctuaries to Asklepios, Aphrodite, Demeter, Serapis, a shrine to Poseidon, an agora, a harbour, a theatre and an odeon (music hall).

Very little remain of the buildings, temples and statues that Pausanias mentions. The expansion of the modern city almost totally destroys most of the ancient structures. The only significant monument from antiquity is the odeon, rediscovered in 1889 and heavily restored. It was built shortly before Pausanias’ visit in the late 2nd century AD who rated it as the finest in Greece next to the one built by Herodes Atticus at Athens.

Next to the colossal bust of Antinous, a never-seen-before inscribed base of a monument dedicated to Hadrian was presented. Dated to AD 132, the dedication is an authentic testimony by Athenian citizens to the recognition of Hadrian’s benefactions to their city. They address their emperor as Olympios (Ὀλύμπιον), Saviour (σωτήρ) and Builder (κτίστῃ). This dedication was orchestrated when Hadrian inaugurated the Temple of Olympian Zeus, founded the Panhellenion and established the Panhellenia Games.

All three titles are encountered on numerous altars, inscriptions and statue bases honouring the philhellenic emperor for his benefactions to the city. The spring of AD 132 saw the formal dedication of the Temple of Olympian Zeus, constructed over six hundred years and finally completed as part of Hadrian’s civic program. While the temple was originally dedicated to Zeus, in effect it became a centre for the imperial cult. Zeus and Hadrian were worshipped together as symbomoi theoi (sharing the same altar), and a large number of statues and dedications were displayed in the vicinity of the Temple of Zeus.

In addition to these two precious artefacts, an Egyptianising statue of Antinous, which in antiquity stood in the Sanctuary of the Egyptian Gods in Marathon, is still being exhibited in the museum’s Egyptian Collection. Herodes Atticus, an immensely wealthy Athenian and friend of Hadrian, erected around AD 160 a sanctuary in Marathon which he dedicated to Isis and Osiris. A statue of Antinous dressed in an Egyptian costume was unearthed in this sanctuary, among other archaeological findings related to the worship of the Egyptian gods.

Antinous is shown wearing the royal short kilt of the Pharaohs (shendyt), a head-cloth (nemes) with its damaged cobra (uraeus). This statue from Marathon is one of several Egyptianising portraits of Antinous, the most famous of which is the Vatican statue found at Hadrian’s Villa. (see image here).

The exhibition “Hadrian and Athens Conversing with an Ideal World” marks the 1900 years since the beginning of Hadrian’s reign, an anniversary that is being celebrated in manifold ways by major European museums and cultural institutions (see Seville, Budapest, Fethiye Mosque, Acropolis Museum).

2 thoughts on “Exhibition: ‘Hadrian and Antinous: an encounter, 19 centuries later’ at the National Archaeological Museum of Athens (#Hadrian1900)”